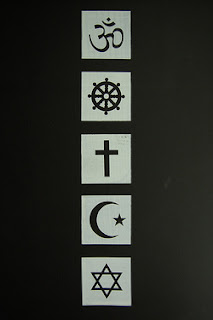 God alone will judge between them in their differences on the Day of Reckoning. (Koran, Sura 2:113)
Many church-going Christians condemn both religious and cultural “relativism”, holding that accepting the one true faith precludes giving any other belief system a place at the table, and that American culture is the acme of human civilization. While I am secure in my faith in Christ (except for, to be completely honest, all the times I am beset by doubts), I prefer to leave the sorting out of who has heard His message and lived it to God. As the Koran says, “God chooses whom He likes for His grace; and the beauty of God is infinite.” (Sura 2:105)
Some, like Huston Smith, a scholar of world religions who was the focus of a five-part television series with Bill Moyers, see an evolving mindset that cherishes Christian identity while refusing to reject the authenticity of other faith traditions. He holds that "nonexclusivism," while not today embraced by a majority, has nonetheless "been affirmed throughout Christian history." He perceives "a new mood in Christendom, a more conscious, general recognition that though for Christians God is defined by Jesus, He is not confined to Jesus." In Norway this year, a Muslim and Christian umbrella groups signed a joint declaration, the first of its kind, supporting an individual's right to convert between faiths without violence, harassment or discrimination. Can this not perhaps be the start of something that could spread beyond Scandinavia?
American poet Coleman Barks laments the exclusivity of the all the Abrahamic religious doctrines -- "The ONLY begotten, the CHOSEN people, the LAST prophet" as an "insult to the soul" -- part of what keeps the soul from "expanding and deepening in love, and living the truth of expressing that."

In the Book of Micah, one passage is the most familiar: that which contains the famous prophecy of transformation: “swords into plowshares...spears into pruning hooks.” But the verses that come after that passage give a positive vision of what is to follow:
And every one shall rest under his vine, and every on under his fig tree; and there shall be none to alarm them: for the mouth of the Lord Almighty has spoken these [words]. For all [other] nations shall walk every one in his own way [The King James has it “in the name of his god”], and we will walk in the name of the Lord our God for ever and ever.
(Micah: 4:4-5)
This does not sound to me as though “our God” will cause everyone to reject his or her own beliefs as a prerequisite for peace being accomplished. Dietrich Bonhoeffer, the Protestant theologian who ultimately had his life cut short by Hitler, has been quoted as saying, "The will of God is not a system of rules established from the outset. And for this reason a man must forever re-examine what the will of God might be. The will of God may lie deeply concealed beneath a great number of possibilities." Recently, many have captured the same idea by cautioning that "we should not read a period where God has placed a comma."
I have known individual Hindus, Muslims and Zoroastrians, Jews, agnostics and even professed atheists who are exemplars of wisdom and morality; surely their goodness did not come from the Evil One. Does this fit with the exclusivity of faith allegiance that so many feel is essential? I do not claim to know – nor do I feel it is my job to know. My job is to be one who “loves his neighbor.” And who is my neighbor? – the Samaritan as well as the Israelite; the Muslim as much as the Christian, Iranians as surely as the folks next door (my neighbors, one house away in four directions, happen to be Jewish, Moslem, Southern Baptist and Evangelical fundamentalist).
Fatemeh Keshavarz relates the story of her (Iranian) uncle, who hears his friends debating the fate of a virtuous man of their community, who happened also to be a Baha'i (which is unacceptable to Muslim orthodoxy); would he, they wondered, be admitted to heaven, or not? Her uncle's oblique but transcendent comment was: “Fortunately, our closet is not large enough to keep God locked inside.” I have heard learned and well-respected Orthodox Christian hierarchs say essentially the same thing – “Ours is the right path...but the others' paths? -- we leave that to God to sort out.”
Posted by Alexander Patico at 7:01 PM