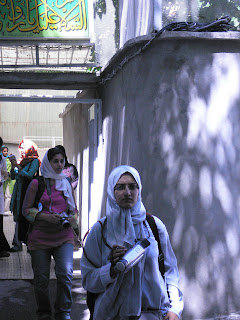 Militarily, as we have heard repeatedly under successive administrations, everything is “on the table”, including first-use of nuclear weapons for the first time since Nagasaki. The biblical phrase “wars and rumors of wars” (Matthew 24:6) describes our time to a T. President Obama may have taken a new look at the situation, but a radically new way of thinking about Iran is still called for, if we are to avert disaster long-range. When we approach the future with trepidation, we should think not only of the events foretold in Luke 21: “Nation shall rise against nation, and kingdom against kingdom,” but also remember the rest of what Jesus prophesied will happen: “it shall turn to you for a testimony...You shall be betrayed both by parents, and brethren, and kinfolks, and friends...and you shall be hated of all men for my name's sake.” This is not a prophecy about our having to meet an assault by foreign forces; it envisions a Christian having to take very unpopular positions, but standing firm nonetheless. But we are assured, “there shall not be a hair of your head perish…In your patience possess your souls.” Though peacemaking is not for the faint of heart, we have good reason to hope for ultimate success.
Posted by Alexander Patico at 2:18 PM