Although many scientists, at the dawn of the nuclear age, claimed that the use of technologies such as nuclear weapons was not really their concern (that being a purely political question), an eminent group of physicists recently saw a clear ethical duty to speak out on the question of nuclear "first use." They stepped out of their ivory towers in April, 2006 to write a joint letter to President Bush in response to published reports that the use of tactical nuclear weapons by the United States was “on the table.” Signatories included five Nobel laureates, a winner of the National Medal of Science, a past-president of the American Physical Society and other luminaries. Their letter read, in part:
"Eighteen hundred of our fellow physicists have joined in a petition opposing new U.S. nuclear weapons policies that open the door to the use of nuclear weapons in situations such as Iran's. The policies represent a 'radical departure from the past,' in the words of Linton Brooks, National Nuclear Security Administration director. Indeed, since the end of World War II, U.S. policy has considered nuclear weapons 'weapons of last resort,' to be used only when the very survival of the nation or of an allied nation was at stake, or at most in cases of extreme military necessity...This is a major and dangerous shift...In the words of the late Joseph Rotblat, Nobel Peace Prize recipient for his efforts to prevent nuclear war, 'the danger of this policy can hardly be over-emphasized.'
"Nuclear weapons are unique among weapons of mass destruction:...[they] release an immense amount of blast energy and thermal and nuclear radiation, with deadly immediate and delayed effects on the human body. Over 100,000 human beings died in the Hiroshima blast, and nuclear weapons in today's arsenals have a total yield of over 200,000 Hiroshima bombs. The available earth-penetrating bomb of the type envisioned to be used against Iranian targets (the B61 mod 11) has almost 30 times the destructive capacity of the Hiroshima bomb (340 kilotons, versus 12 kilotons).
"There are no sharp lines between small 'tactical' nuclear weapons and large ones, nor between nuclear weapons targeting facilities and those targeting armies or cities. Nuclear weapons have not been used for 60 years. Once the U.S. uses a nuclear weapon again...there will be a greatly enhanced risk that regional conflicts could expand into global nuclear war, with the potential to destroy our civilization...It is gravely irresponsible for the U.S. as the greatest superpower to consider courses of action that could eventually lead to the widespread destruction of life on the planet." 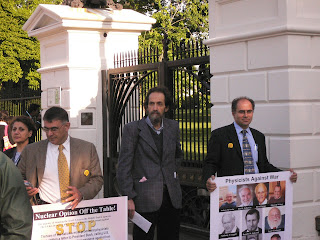 I accompanied Professor Jorge E. Hirsch of the Department of Physics at the University of California-San Diego, when he and others held a press conference (at the National Press Club) and then attempted to deliver a copy of this letter to President Bush; after nearly 40 minutes negotiation, a White House spokesperson agreed to take the letter, but could not arrange a meeting with any member of the White House staff.
Another occupant of the White House, Dwight Eisenhower, was even more succinct than those scientists, when he said, "You can't have this kind of war. There just aren't enough bulldozers to scrape the bodies off the streets." Yet, even with a new administration and a new arms control treaty, the United States still maintains 1,790 deployed nuclear warheads (Russia has 1,556), to be reduced to 1,550 each by the year 2018 -- each one of which is more powerful than any weapon that has ever been used in hostile action. Even the assistant secretary of state for arms control termed current initiatives in arms reduction by the five major nuclear powers as "baby steps." (per Washington Post article of October 27, 2011).
Posted by Alexander Patico at 5:28 PM