I was flying from JFK to Tehran’s Mehrabad International in May of 2006, part of a peace delegation of twenty-two ordinary, but also in many ways quite extraordinary, Americans from all parts of our country. On the plane, taking off from Charles de Gaulle airport for the last leg of our journey, I spoke with a young Iranian man on his way home to Iran. He had visited a cemetery in Paris where several noted Iranian writers are interred, including one we both admired, novelist Sadegh Hedayat. I recalled the opening line of Hedayat's dark novel Blind Owl: “In life there are sores that tear and eat at the soul, like cancer.” (I made this the subject of one of my senior English classes in the little town of Firuzkuh.) We agreed that the will to make war is one of these sores. Balancing the voices of bellicosity, there must be voices of humanity. Our delegation that year included a retired banker, a child psychiatrist, veterans of the Vietnam War and members of the clergy. They did not go in order to advocate, but simply to have an honest encounter with fellow human beings. A young anthropologist in the group, Sahar Driver, said: 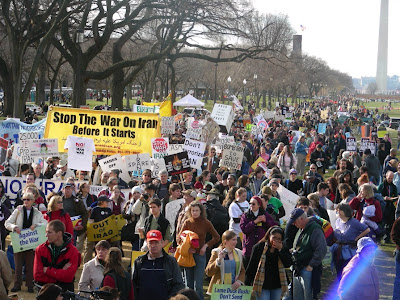 "How might we as Americans overcome our historic amnesia that contributes to so much violence, even as we espouse 'peace' and 'freedom' for all? We come as delegates for peace, yet what more important thing can we do towards this end but to listen, pay attention, and learn from these people? If all I have done as a result of this trip is begun to dispel the myths that circulate about Iranians, then I have done a lot. And if I can hold up a mirror, then I have done even more. Violence begins in the smallest of spaces. Peace then, must as well."
Instead, there has been a disturbing sea-change within America in what we seem to find acceptable. On March 21, 2006, a website called "Tradesports" was launched that recalled 1984 or Mad Max (it folded in 2008). Tradesports accepted wagers on, among other things, death and destruction, using odds developed by professional security groups. As one example, bets could be placed on whether a joint US/Israel attack would kill Iranians before June 30th of that year. I, for one, am happy that those betting on that prospect lost their money. What we like to call “Western Civilization” now includes wagering on how much time an innocent child has left before her life is extinguished!, for surely such “collateral damage” would be a part of any attack. (This reminds one of the Roman legions casting lots for Jesus' clothing.) Imagine if, instead of mentioning cities in Iran, the betting focused on casualties in St. Louis, Columbine or Virginia Tech.
Later that year, conservative commentator Bill O’Reilly expressed an on-air opinion that Iran should be bombed into non-existence. No reaction came from the White House or the State Department. Don Imus made a similarly callous remark to his millions of viewers. Talking about the crash of an Iranian Airliner in the United Arab Emirates, Imus remarked, “When I hear stories like that, I think: who cares?” In fact, only the Iranian-American community and a few others seemed to care or to mind.
Many Americans saw the video of Sen. John McCain, a man who was seeking the nation's highest office, flippantly answering a reporter's question on policy toward Iran by chanting "Bomb, bomb, bomb; bomb, bomb Iran" to the tune of the Beach Boys' song, Barbara Ann. While many later decried this behavior, many in his audience cheered. Indeed, they may be the prime market for one internet merchandiser who was selling T-shirts, sweat-suits and thong underwear with a map of Iran emblazoned with the words “NUKE ‘EM!!” Treated as "a bad joke" by the McCain camp, this "mistake" was compounded by the March 2008 interviews in which McCain wrongly linked al Qaeda in Iraq with Iranian training support. (On one occasion, he was corrected by his traveling companion, Sen. Joseph Lieberman, himself a supporter of the U.S. presence in Iraq; on others, reporters had to challenge his "misstatements.") 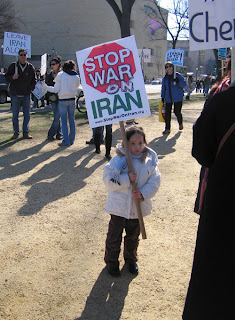 What is happening here? Isn’t it the process that Chris Hedges warned about in his book, War is a Force that Gives Us Meaning: the need to demonize the enemy before the launching of an attack can become psychologically supportable? It was done with “the Japs”, “the Huns”, “the gooks” and “the towel heads” and "sand niggers;" now it is the “Axis of Evil.” In this process, the other is made to become a creature unworthy of our compassion. (Also see anthropologist William O. Beeman’s book, The Great Satan vs. the Mad Mullahs: How the United States and Iran Demonize Each Other.)
While we are busy tarring the Islamic Republic with the brush of deviousness and malevolence, the United States – and therefore American Christianity – has reached an all-time nadir in terms of how we are regarded outside our borders and among those in other faith communities, though the election of Barack Obama held promise for some improvement on that front. We (speaking about Christians) should be known, per the scriptural standard, according to how we “love one another” (John 13:34-35). It seems that this is being rapidly supplanted by our reputation as people who hate all those who are not like us. In poll after poll, fewer and fewer people around the world look up to us as a country with something of value to teach the rest of the world. A Pew Center poll, done in April/May 2006 showed that people in six Muslim countries, all "friendly" to our country -- Egypt, Indonesia, Jordan, Nigeria, Pakistan and Turkey -- perceived Westerners (Americans and Europeans) as “selfish, arrogant, immoral and greedy.”
In the early years of our republic, Jefferson said, “I tremble for my country when I reflect that God is just.” I cannot improve on those words of my most distinguished fellow alumnus of the College of William and Mary, but merely add my own quaking to what he felt then. And yet, I also remember that another forefather, St. Isaac the Syrian, counseled, “Never say that God is just. If He were just, you would be in hell. Rely only on His injustice which is mercy, love and forgiveness.” For “with God all things are possible.”
Posted by Alexander Patico at 3:19 PM