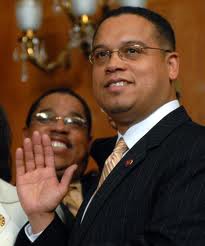 January 2, 1007, when a young politician named Keith Ellison was sworn in as a member of the U.S. House of Representatives, he received a bit more press attention than the average first-termer. Certainly, the fact that he was a lawyer did not distinguish him from the pack, nor the fact that he came out of the Democratic Farm Labor Party – the party of classic liberals such as Hubert Humphrey and Walter Mondale. Nor did the media focus on his having been raised as a Roman Catholic; John Kennedy and others had blazed that trail before him. He was not even raised up as the first African-American to be elected to the House from the State of Minnesota, though he did hold that distinction. Ellison made the front pages because he was sworn in using the holy book of his chosen faith community, the Koran.
Not only the press took note. Some conservative pundits rose in vehement protest. Fellow Congressman Virgil Goode (R-VA) went public with his view that the swearing-in was a threat to "the values and beliefs traditional to the United States of America.” He went so far as to warn that "...if American citizens don’t wake up and adopt the Virgil Goode position on immigration there will likely be many more Muslims elected to office and demanding the use of the Koran."
Jesus never admonished his disciples to go forth and make sure that Jewish law was cast out, or even that the statues of Rome's pagan gods be pulled down and destroyed. He was not the political zealot whom so many awaited. He called us rather to manifest our faith in Him by showing love in all our dealings with other people. Our American system wisely makes space for faith, while refraining from picking winners among the faiths. It supports toleration, and limits anyone's monopoly on piety, at least as far as the public sphere is concerned. 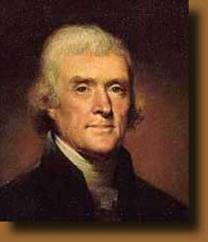 In 1765, while studying for the bar, a young Thomas Jefferson purchased a two-volume Holy Koran that had been published in London. It was upon this rare book, now in the collections of the Library of Congress, that Rep. Ellison laid his hand while he took his oath. He noted that for Jefferson, “knowledge and wisdom could be gleaned from any number of sources, including the Quran.”
The fact is, there are developments and trends in every part of today's world that should give us, as people of faith, great concern. As Professor Seyyed Hossein Nasr of The George Washington University wrote in his The Heart of Islam:
"In reality, each civilization, whether in East or West, has decayed and deviated in its own way and must pose the question to itself about what went wrong, rather than exclaiming with hubris and self-righteousness about what went wrong somewhere else because the people in that “somewhere else” have not followed its way of thinking and acting. We must desist from identifying ourselves with pure goodness and the other with pure evil. Even Christ said only God is good in the absolute sense. Each civilization must become ever more aware of its own shortcomings and evil elements as well as its virtues and what is good in it. Muslims must ask themselves what went wrong within their own societies, but the West must also pose the same question about itself. And this task of self-examination is even more urgent for the West, for at this particular juncture of human history it possesses much greater power than other civilizations and has greater global influence."
Which comes closer to "Love thy neighbor."? -- Rep. Goode's imprecations and exhortations about immigrants, or Prof. Nasr's recommendation of tolerance and self-assessment? In our Orthodox service, we ask God to: "save sinners, of whom I am first." We don't ask him to smite those who think differently.
Posted by Alexander Patico at 3:39 PM