"He who makes his own house lofty invites destruction." (Proverbs 17:18)
In considering the spread and virulence of international terrorism, we must be willing to ask whether our presence in Iraq -- and even in Afghanistan (to say nothing of the scores of other places we maintain a military presence) -- has been “part of the cure” or has only served to exacerbate an already frightening dynamic abroad in the world.
Look at how things developed during the time just after the U.S. invasion of Iraq. A Christian priest in Baghdad told a Western journalist, one month into the Iraq War: "Iraq will burn. Everything around us is seething. The Shias are mobilizing, the Kurds are mobilizing and the fundamentalists are mobilizing. Christians are increasingly frightened. Up until now we have been spared Islamists in Iraq. This is the work of the bombs…So many killed, so many maimed. Why must they kill so many innocents?"
(Since then, many more have been killed -- nearly a hundred this week alone. Many Christians have fled the country of their birth. The new government must deal with a host of thorny issues and internal strife and dissension is still rampant.)
It was at that point, just a few weeks after “shock and awe,” that journalist Asne Seierstad wrote that suicide bomber volunteers, from Yemen, Syria, Tunisia, Jordan and elsewhere in the Arab world, started showing up in Baghdad to fight Americans and “earn paradise.” We should not forget that in the early days of his regime, Saddam was actively anti-religious, until he found that religious behavior could help him maintain his power. When the war started, Seierstad reports, “the Islamic groups, which had sought refuge in neighbouring countries to escape persecution, are now welcomed home as heroes and liberators.”
A Mr. Ramadan, one of Saddam’s close associates, explained to her the move toward suicide-bombing as a tactic: "They arrive with their B-52’s, capable of killing lots of people. What is our answer? To wait until we Iraqis have designed the same type of bomb? No, for that we do not have time. Now all Arabs will turn themselves into bombs…They seek Paradise and the road leads through Iraq." Indeed, as Noam Chomsky noted, between 1980 and 2003 there were 315 suicide attacks worldwide; in Iraq, from the time of the U.S. invasion up through 2006: nearly 400.
Statements by officials of the previous administration gave the clear impression that the sooner the rest of the world looks just like us, the better. Whether what we are promoting is democracy, the Judeo-Christian tradition, or Western values, our stance appears to be “our way, or the highway,” except that there is no highway off our planet for those who opt not to conform. At least the crusaders of the eleventh century eventually went back home. Today's crusaders are there to stay – in the Caribbean and Central Asia, in Europe and the Pacific; permanent bases, prolonged U.S. presence, persistent irritation, leading to perpetual conflict.
Can anyone ask in all seriousness “what would Jesus do?” and come up with these kinds of answers: torture to obtain intelligence, “collateral damage” in the form of civilian deaths, the laying of land-mines and the dropping of cluster bombs in civilian areas? 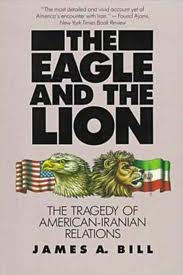 Prof. James A. Bill is professor emeritus of government and director emeritus of the Reves Center for International Studies at the College of William and Mary, and author of the award-winning The Eagle and the Lion: the Tragedy of American-Iranian Relations, and Roman Catholics and Shi’i Muslims: Prayer, Passion and Politics. In an article that appeared in the William & Mary Alumni Association magazine (Spring/Summer 2003) he wrote:
"The heavy American presence in the [Persian] gulf region has increasingly alienated many citizens of the Middle East…It has become increasingly difficult for American citizens to walk the highways and byways of the gulf states. This is seen in the travel advisories that warn Americans…against traveling or living in the gulf. It is a sign of the times that American diplomats and military advisors inhabit embassies that resemble concrete fortresses surrounded by sensors and computerized barriers. It is ironic that the United States, the sole global super-power, finds itself in a situation where its citizens must increasingly step carefully and cautiously in many important areas of the world…
"Washington must question the preoccupation with force and the glorification of war. Delicate social and political problems cannot be bombed or “missiled” out of existence…
"The United States would do well to develop a foreign policy that is rooted in a sense of morality…United States policy-makers, if informed and sensitive, can do much to improve the situation. If, on the other hand, the United States replaces astute diplomacy with the heavy club of military power, if it fails to think strategically and misunderstands the people and politics of the region, then it may find itself trapped in the midst of the firestorm, a conflagration that will spread with time and that has already begun to spill over into the United States itself."
And, similarly, from U.S. in the World:
"There are no good military options for solving this problem [of Iran and its nuclear development program]. The disastrous costs and consequences of military action would far outweigh the partial, temporary benefits. Taking excessive risks for uncertain rewards isn’t smart – it’s reckless…There is no justification for considering the use of nuclear weapons against Iran. Leaving this option on the table inflames anti-American extremism and costs us the trust of vital allies. Words and actions that make us less secure in the long run don’t belong in a smart security strategy… We need to learn from our experience in Iraq – lessons about the limitations of military force and the risk of unintended consequences."
Perhaps Prof. Vali Nasr, professor in the Department of National Security Affairs at the Naval Postgraduate School, and an Adjunct Senior Fellow of the Council on Foreign Affairs, has put it most succinctly. In a March 26, 2007 interview on PBS' WideAngle program, he discussed the minimal pay-offs that have been and may be derived from U.S. attempts to pressure or manipulate Iran. After having reviewed recent events which have made so many aggressive options either untenable or unsustainable, he said: “If our coercive ability is limited, we should not continue to rely upon it. There must be a wider array of tools in our strategic toolbox.”
Unfortunately, as Chomsky points out, our approach has been to demand one set of actions from other nations, while holding ourselves to quite different standards. We bring cases to the World Court when it suits us, but claim exemption from its mandate if the Court seeks to constrain U.S. interests. The "rights of man," "law of peoples," "international human rights," "or the "Nuremburg principle" all have variable and plastic meanings in their actual application by U.S. leaders. The fact that the Inter-American Commission on Human Rights sought to have oversight of the legitimacy of Guantanamo detentions scarcely rated mention in the U.S. press. Chomsky cites Stephen Zunes, head of the Peace and Justice Program at San Francisco State, regarding the "growing bipartisan hostility to any legal restraints on the conduct of the United States and its allies beyond their borders, particularly in the Middle East."

Posted by Alexander Patico at 9:41 AM