(More on the Washington Post article by Trita Parsi of NIAC.)
Other lessons that Parsi gleaned from the past half-century of failed diplomacy with Iran:
"Respect and tone matter... the United States and Iran have been trying to coerce one another into submission rather than negotiating toward compromise." A Turkish diplomat is cited: "When you put intimidation and coercion ahead of respect, it falls apart.”
Next, "Don’t limit the agenda...negotiations focused on one variable — the development of nuclear weapons — is not a formula for success." (We saw that the proposal Tehran sent via the Swiss in 2003 was amazingly comprehensive -- it treated all the important bones of contention that the two countries have been gnawing on for decades.) This means that even the tough issues should be on the table -- "Brazil raised the issue of human rights, a sensitive topic for Tehran."
On the other hand, Parsi says, "Put nuclear inspections and verification at the center" of the negotiating agenda. How can nuclear enrichment be "inspected, verified, limited and controlled," since it is not likely to be dropped from Iran's list of must-haves (and is permitted under NPT rules).
He also urges, as Limbert did, the skillful and creative use of intermediaries (a time-honored method of dispute resolution in the Middle East and elsewhere). "[N]ations such as Norway, Sweden, South Africa, Oman and Qatar can help overcome the current impasse, primarily by bridging the trust gap..." (though trust still will have to be earned by both sides as part of the process).
Ending his piece, Parsi states, "Sustained, persistent diplomacy remains untested...It is superior to war and sanctions for the simple fact that, if successful, it not only could prevent Iran from developing nuclear weapons, but the reduced tensions would lessen Iran’s demand for nuclear deterrence...One simply cannot threaten or sanction a country into a sense of security." 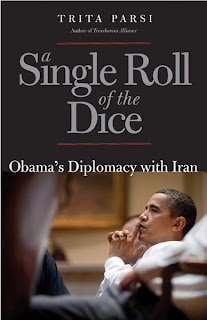 (Trita Parsi is the author of the new book A Single Roll of the Dice: Obama’s Diplomacy With Iran.)
Posted by Alexander Patico at 8:43 AM