In Iran's Zagros Mountains, not far from the ancient city of Isfahan, there is a mountain called Helen. The volcanic peak that all know about in the State of Washington was named for a saint. Perhaps this one is as well...
Helen Jeffreys Bakhtiar hailed from Boise, Idaho. In the 1950's she was a public health nurse in Iran, having already spent a hitch in the United States Navy, reaching the rank of lieutenant commander. Helen was working as part of what is known in Iran as "Asl-e-Chahar" -- a translation of Point Four, the shorthand name for an American international development program that began under President Harry S. Truman. It was the fourth pillar of his foreign policy agenda, as enunciated in his inaugural address. Americans with expertise in a variety of fields, such as agronomy and hydrology, helped improve the lives of the villages that dot Iran's more fertile regions, as their colleagues did in many other countries. Point Four was a precursor to the later International Cooperation Administration and the Agency for International Development.
Like other such programs, including the U.S. Peace Corps and the Hospital Ship Hope, their success most often rested on the character and commitment of the individuals charged with doing the actual work out in the field. The impression made by Helen Jeffreys on her Iranian colleagues and constituents was so lasting and profound that not only that mountain, but an entire region, was named in her honor.
Her great-granddaughter, Samira Ghaffari, tells us that Kuh-a-Helen (Helen's Mountain ) "is home to a wide variety of species, including brown bears, leopards, wildcats and eagles. Iranian environmentalists have marked the mountain and the surrounding forests as a protected area." 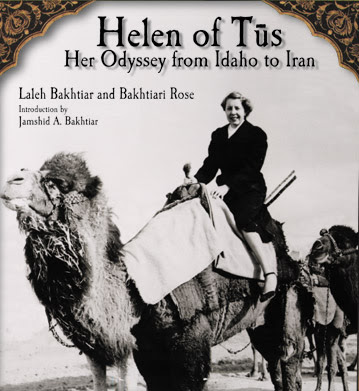 Davar Ardalan, whose parents were raised in America and then moved back to Iran, is Samira's mother. Ardalan wrote a book called "My Name is Iran: A Memoir" (in fact, one of her names is the same as the country), published in 2007. She is also a producer for National Public Radio. Her father took a job helping to build housing for the Iranian National Oil Company workers, starting in the mid-sixties, when the Shah of Iran was (or seemed to be) firmly in place on his peacock throne. Davar married in Iran and was there until after the Islamic Revolution took place.
Helen's daughter, Mary Laleh Bakhtiar, wrote a book about her mother, called Helen of Tus: Her Odyssey from Idaho to Iran, as well as a book about her father Abol Ghassem Bakhtiar, who was a physician.
What is the significance of this family history? It is representative of a host of intertwining personal histories that link Iran and the United States.
There was Gertrude Nye Dorry, a women known to hundreds of Peace Corps volunteers as the "mother" of English language instruction in Iran. She not only helped prepare Americans to teach, but literally "wrote the book" on the field, authoring many textbooks and teachers' guides. Holding a PhD degree from the University of Michigan, she positively influenced the character of US-Iran relations through her academic prowess and organizational skills. Thousands learned English because of her efforts, allowing them to study abroad, pursue careers in the sciences or go into the diplomatic service. Dr. Dorry died back in the States, but she left a huge hole in the Iranian educational landscape when she left.
Sadly, though many Iranians are making their mark on US society in a variety of fields, American impacts on Iranian consciousness now are virtually confined to the goods that are now unavailable to Iranians due to sanctions, the troubling thoughts of a possible attack, and the denunciations of Iran that have become a regular feature of U.N. meetings and weekly press conferences.
Most famous among the Americans held in esteem by Iranians was Howard Baskerville. Born in North Platte, Nebraska, and killed outside Tabriz in 1909 helping to defend constitutional government in Iran, his name is known by most Iranians even now. Baskerville is commemorated to this day by a monument erected beside the Ayandeh River in the heart of Isfahan. Baskerville said, "The only difference between me and these people is my place of birth, and this is not a big difference."
Posted by Alexander Patico at 3:30 PM