Though our two countries seem never to have been farther apart, there are now a number of different groups bringing Americans and Iranians together.

A group called Search for Common Ground (SFCG) in 1996 began a series of discreet meetings between well-placed but unofficial Iranians and Americans. Since that time, dozens of citizen-to-citizen exchanges have involved wrestlers and basketball players, astronomers, environmentalists, educators and lawmakers. Assisting the Institute of International Education [Full disclosure: my employer from 1985 to 2005], SFCG supported the Foreign Language Teaching Assistant Program, which placed Iranian graduate students in US universities to teach Persian language. A conference held in September 2004 was titled: “The Call for a New World Order: Dialogue among Civilizations Revisited” [a reference to the UN initiative Dialogue among Civilizations that was proposed by the then-president Khatami]. Panel sessions at the conference included: “The Role of Interfaith Dialogue,” and “The Role of Diplomacy in Dialogue among Civilizations.” It is precisely the rich possibilities that exist at the nexus between faith and diplomacy that led me to start this blog.
Network 2020 is an independent nonprofit organization that helps prepare next-generation leaders in the United States to participate meaningfully in the creation of policies promoting global security. Network 2020 fielded two trips to Iran in the fall of 2006. Delegates conducted more than 50 interviews in six cities and several villages, to gain a better understanding of contemporary Iranian thinking and attitudes. “Within Iran,” they found, “political debate persists, skepticism about the government’s motives abounds, and liberal civil society institutions have been tenacious. While Western analysts usually portray the country in terms of a crude division between 'reformists' and 'conservatives,' the reality is far more nuanced, and political alignments and personal ideology can be fluid.” Their recommendations: reestablishment of diplomatic relations with Iran, building up expertise on Iran, working with the Iranian government on a variety of issues, opening congressional hearings on how to improve relations, and expansion of people-to-people programs and linkages.
The Fellowship of Reconciliation (FOR), an organization committed to non-violent social change, has been bringing together people whose leaders are in opposition since before World War I. FOR organized trips to the Soviet Union during the Cold War, to Vietnam in the 1960's and most recently to Iran. The FOR delegation which I joined in May 2006 included men and women from all parts of the United States: a United Church of Christ clergywoman and a Buddhist peace activist from New York, a publisher from Louisville, 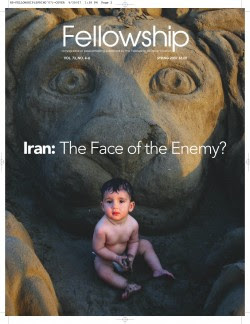 an artist from Philadelphia, a professor from Olympia, WA, an anthropology student from Oakland and a child psychiatrist from Amherst, MA. Our group leaders were an Episcopal nun who had lived and worked in Iran for six years, and an author of books on Gandhi and Martin Luther King. FOR, headquartered in Nyack, NY, has continuing sending delegations each year since then.
The International Center for Religion and Diplomacy, based in the nation's capital, sees that what it calls “identity-based conflicts” often can resist solution through traditional diplomacy alone. The Center's mission is to bring religion into the dialogue in an effort to achieve better outcomes for inter-ethnic or tribal hostilities and conflicts that have a clash of cultures or faiths as a key element. Its Iran Initiative has brought together Christian, Jewish and Muslim clergy and laity, worked with government officials and lawmakers, and sponsored events that encourage examination of differences and commonalities.
Eastern Mennonite University, an institution with a long tradition of attention to conflict resolution and ecumenism, has had scholars attend the Jami'at Al-Zahra Theological Seminary in Qom, Iran, where some 900 international students (among a total of over 12,000) from over 40 countries study theology and spirituality at no cost (except for language instruction). The Mennonite Central Committee was a co-sponsor of a 2007 delegation of religious leaders who traveled to Iran and met with officials, including the President of Iran. One of the delegation members, Jeff Carr, wrote: "What is clear to me . . . is that we must find a way to tell our stories and to have our stories heard. And then we must begin to write a new narrative together. One that comes out of humility, mutual respect, and shared understanding. I am convinced it is the only path for a true and lasting peace with justice."
The Catholic University of America's Council for Research on Culture and Values has maintained a dialogue with faculty of the Shahid Beheshti University in Tehran who are part of the United Nations human rights network of academic institutions. (The last joint meeting, to the best of my knowledge, was held at CUA in Washington, DC in June of 2005.)
The New College of California has a mission statement that says it is “committed to education in support of a just, sacred, and sustainable world. We cherish intellectual freedom, the search for social justice, respect for differences, and a belief in collective responsibility for the welfare of all people.” New College planned another trip to Iran for the summer of 2007. The program gives its students four credits toward fulfilling their Humanities requirement, based on the experience they have on such as trip.
California-based Global Exchange is a membership-based international human rights organization dedicated to promoting social, economic and environmental justice around the world. Founded in 1988, Global Exchange has worked to increase “public awareness of root causes of injustice while building international partnerships and mobilizing for change.” The organization has been sending American travelers to Iran since 2000, hoping to “demystify and contextualize the negative images of Iran, while shedding some light on the many contradictions and realities of life in the Islamic Republic.”
(To be continued in my next post.)
Posted by Alexander Patico at 12:21 PM