(A continuation of the previous post on Iranian attitudes.)
Improving US-Iran Relations: A slight majority…of Iranians favor a variety of possible steps that have been proposed for improving US-Iranian relations. Large majorities of Americans support most of these steps. The steps include direct talks between governments on issues of mutual concern, more cultural, educational and sporting exchanges, better access for journalists from both countries, increased trade and more tourism.
{When the United States finally consented to talk to the North Koreans about their nuclear program, an agreement (though far from perfect) was found to be achievable. In the case of Iran, genuine dialogue has simply never been tried. Congressional appropriations for “democracy support” to Iran had an inverse effect on reduction of tensions, causing civil society there to go to ground rather than to be revivified (under U.S. law, it was, by law, a breach of national security for even the names of recipients to be publicly mentioned, but it was difficult for the "taint" of U.S. support to be kept secret in Iran).}
Iran’s Nuclear Energy Program: An overwhelming majority of Iranians believe that it is very important for Iran to have a full-fuel-cycle nuclear program. Majorities cite as key reasons for having such as capacity: securing Iran’s energy needs, enhancing Iran’s national technical competence, enhancing Iran’s great power status, preserving Iran’s rights to nuclear energy under the NPT and preventing other countries from trying to economically and politically dominate Iran…Iranians express substantial concern about the potential for disruption in the supply of energy and enthusiastically support nuclear energy…Americans have an even higher level of concern about possible disruptions in the energy supply, and recently seem more ready to entertain the building of new nuclear power plants here. 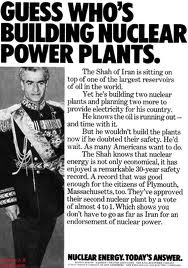