Dear Readers:
The following may seem off-topic.  I feel, however, that the political process will be the main determinant of whether there is a "hot war" involving Iran.  Anything that can open a window and let in some fresh thinking will be to the good.
A Parable 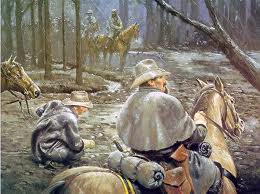 The general staff began to get reports from scouts -- evidence of a large force having been in the area not many days before. The fragmentary information based on tracking led to a lot of speculation. They must be sneaky, said one soldier, they didn't leave much behind. They must be stupid, said another, since they left a trail a mile wide. I expect they are a bunch of cowards -- look at how they cleared out of here in a hurry, said a third. They must be tough, some guessed, from the fact that their army didn't seem to be gaining on them. By the next day, soldiers had started to call the unseen foe (for they assumed that they were up to no good) by the nickname, "The Devil You Don't Know," or just "The Devils." Whether they itched to meet the enemy on the battlefield or had nightmares about a deadly ambush, the soldiers knew that they hated them.

All this evaporated when a seasoned officer discovered that an error on their map and a faulty compass had caused them to go in one large circle -- they were now passing the same places where they had broken camp last week. As the officer sardonically observed, "We have met the enemy...and he is us!!

A group of Americans who came together this past weekend in Washington have concluded that the folks who run our two main parties are guilty of the same fatal mistake -- of tracking the other party as though they are the enemy. In reality, we are all in the same army, carrying the same flag and marching to the same martial music. We may disagree about the direction to march in or the kinds of supplies to take, but we needn't be baring our bayonets in each other's face.  The group was volunteers with Americans Elect.

Part of what has changed is the technology that we have available to us. Author/activist Rebecca Mackinnon said, in Sunday's Washington Post, that "Politics as usual are not compatible with the Internet." Where Democrats and Republicans have used mass media to raise the profile of their candidate or sent tailored communications to individual voters, it is now feasible, for the first time, for the actual nominating process to take place on the Web. This could remove the impact of icy weather or malfunctioning voting machines entirely. It would eliminate the most nonsensical features of the current system, such as a small, unrepresentative group of Iowans giving a royal thumbs-down to a qualified candidate or little New Hampshire anointing a Chosen One.

What has also changed are the attitudes of the people. Many are beginning to feel that "extremism in defense of liberty" actually may be a vice, if it ends up undermining our liberty. They actually want to know what other folks think, even if they don't agree. The problems facing the country are simply too huge for us to be small and narrow in our views. Those most familiar with conflict resolution know that you never start with the solidifying of positions; you begin with identifying core interests and looking for common ground. Not exactly what we've been seeing in Congress over the past decade, is it?
Americans Elect says: We don't want to stake out positions. We don't want to back a candidate. We don't want to tear down an opponent. All we want to do is to open up the process, give someone else a chance, and allow the American people themselves, directly, to decide. In this age, it can be done. We don't have to be satisfied with back-room deals, media market mega-buys and elections that are bought and sold. A nominee who stands for election this year via the Americans Elect channel will not even know who paid the bills to make that possible. He or she will be answerable only to the American voters.

I may not, in the end, vote for this third ticket, but I will defend its right to exist.  We have nothing to lose but the blinders put on us by the present duopoly.

It has been said, "Nothing is more powerful than an idea whose time has come." My fellow Americans, do it! Elect! Choose your next president and vice-president. Whether that person ultimately is a Democrat, a Republican, or an Independent you have the right to be part of the process at every stage. Read more at www.americanselect.org.

Posted by Alexander Patico at 11:28 AM