Recently (especially since 2001) it has become harder to be Iranians (especially if they are Muslims) living in the United States. Their immigration status often comes under scrutiny. Travel to one's homeland entails having to come back through U.S. Customs, where not every resident (or even U.S. citizen) is treated the same. A recent study by New York University School of Law's Center for Human Rights and Global Justice, offered (according to an InterPress report) “a searing indictment of U.S. immigration practices toward thousands of Muslim immigrants during the past six years.” The report, Americans on Hold: Profiling, Citizenship, and the "War on Terror," documents “expanded security checks” and “citizenship delays...often for years on end. Many have lived in the United States lawfully for many years.” The article goes on to say: 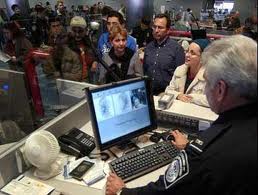 "Airport officials are reportedly required to stop anyone with a 'Muslim name' and name-check that individual against the list...
"The report cites the example of the National Security Entry-Exit Registration System, which required non-citizen males from 25 countries designated as threats to national security to register formally with the government. With the exception of North Korea, those countries have predominantly Arab or Muslim populations.
"'Discriminatory profiling is illegal under international law and is a poor substitute for real intelligence work,' said Jayne Huckerby, research director for The Human Rights Center.. '..Taking years to identify individuals who are security threats does not make us safer. Ensuring timely and good faith completions of background checks will help the U.S. advance its national security goals,' she said.
"Federal law requires the [government] to grant or deny citizenship within 120 days of an applicant's examination...But many Muslim applicants have been waiting in uncertainty, delaying family and business decisions as their papers are delayed for one, two or even three years.
"The study quotes the immigration service's ombudsman as saying that prolonged name checks “…rarely, if ever, achieve their intended national security objectives."
Both similarities and differences between Iranians, other Muslims and the general U.S. population deserve scientific study, rather than stereotyping based on rumor and misinformation. A Pew Research Center poll found the following attitudes among the 2.35 million Muslims in America (the number which the Center itself uses, which is not universally accepted as the correct one, since the U.S. Census does not ask religious affiliation):
Regarding the last point: part of the reason the world may not take out anti-terrorism campaign seriously is that, as Noam Chomsky points out (in Failed States), we have often set aside terrorism concerns if they were trumped by various other priorities. Chomsky cites several instances of variance from the Bush doctrine "those who harbor terrorists are as guilty as the terrorists themselves:"

Posted by Alexander Patico at 1:12 PM